THIS MISSION IS NOT CURRENTLY OPERATING

Orthodoxy is the ORIGINAL Christianity! The Orthodox Church dates from the time of Jesus Christ Himself - He founded it and it has continued in existence throughout the succeeding two millennia. The Orthodox Church, unlike all other churches, teaches the whole of the original Christianity as Christ Himself taught it and as it was expounded by His Apostles to the earliest Christians. We use the WHOLE Bible - not the grievously shortened version so common today. The Bishops of the Orthodox Church in the second and fourth centuries were those who determined, with the guidance of the Holy Spirit, which books would comprise the New Testament. The New Testament is the creation of the Holy Spirit and Christ's own Church from that time!

We are a mission of Saint Petroc Monastery, which is a monastery of the Russian Orthodox Church Outside of Russia. We are not Russians, and our worship is that which was authorised by the Church of Russia in 1870 and 1907, when it authorised traditional Western services to be used by Orthodox people.

We are under the authority of His Eminence, Metropolitan Hilarion of Sydney.

Our mission is to enable people in Perth to become Orthodox without losing their Australian culture and using the English language. We are, in essence Australian Orthodox.

No posts.
No posts.
Home
Subscribe to: Posts (Atom) 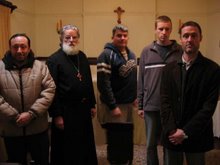 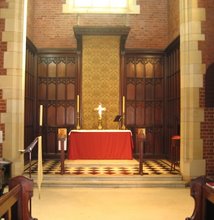 Our present (borrowed) place of worship